Bijan Elahi was born in 1945 to a wealthy family in Tehran. Elahi studied painting under the guidance of the Iranian painter Javad Hamidi, with two of his paintings accepted for the Paris biennale, before devoting himself exclusively to poetry. For much of his life, Elahi was the leading figure in a circle of young poets who developed the movement known as Other Poetry (she’r-e digar), which was to transform Iranian literary modernism during the 1960s and 1970s. Other Poetry was itself the inheritor of the New Wave poetry movement that marked the highlight of avant-garde poetics in pre-revolutionary Iran. Elahi was also a prolific translator of T.S. Eliot, Arthur Rimbaud, Henri Michaux, Friedrich Hölderlin, and many other major poets.

As suggested by the poems below, Elahi’s idiosyncratic and erudite mode of poetic expression incorporated elements of ancient Iranian mythology, Persian Sufism, and French Surrealism. Although one of the most erudite poets of his lifetime, Elahi never completed a formal education. He took leave of public life early in his career, spending his final three decades immersed in Sufism and poetic creation and translation in his home in northern Tehran. During the last three decades of his life, Elahi neither published his poems nor appeared in public. His work entered the public spotlight after his death from a heart attack in 2010. The young generation of contemporary Iranian poets have turned to Elahi’s verse as a vehicle for new modes of expression and experimentation.
Rebecca Ruth Gould

The following poems by Bijan Elahi were translated by Kayvan Tahmasebian and Rebecca Ruth Gould and have been reprinted from High Tide of the Eyes copies of which can be purchased by following the link. You can find out more from his website, curated by the translators. 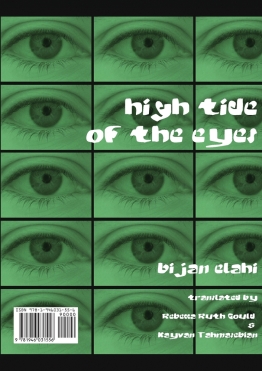 Bijan Elahi: Five Poems from High Tide of the Eyes 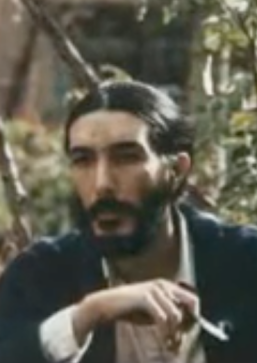 Before cocks crowed
I believed
your eyelids
opened dawn’s book.

Your mouth held for me
laughter warmer than the unrisen sun,
than the tear, again to be shed.
The cocks fell asleep before they crowed.
They understood they would have other days to crow.
They knew they would be forgiven
when the end comes for us all.

Only the cypress is a betrayer,
courted every season.

All these roads would end in white
if they replied to you.

Your birthplace, you knew, was a town
bigger than your heart
that left you without an answer.

A woman’s lips blossoms
in a town smaller than hearts.
A woman’s lips end in white,
to the cold cheeks of the year’s martyrs,
my cold cheek was a sun
that did not reply.

I LAUGH FOR YOU

The black locust, angel of the poor
is preparing for us
her cool evening drink.
I bend towards you:
your skin
moves like breeze and water beasts.
The air is a cup of the spirit
of a burning and witnessing moth
between a thousand suns and a thousand shadows of you.

You are the white corn husks ‌of my childhood
that I glean again.
You are my first fingers.
The poor laugh
beside green cucumber bushes.
Do you see how naked I am?
My umbilical cord is uncut.
Like a new birth, my love is
slime and blood.
I laugh for you.

The houses nearby
are lit earlier.
The air between thousands of lamps
and thousands of your shadows near and far
rises in ash.

They grew me,
grew me to surround me
by hasty suns.
You passed and picked me so smoothly
that I touched the breeze
in your hands.
You witnessed the sun and the air,
with breeze in your burning red hair.
The water beasts
went to sleep quietly
and each one of them touched
your clear blood
In their dreams.
You became a face
I gazed at
and
gaze at.
Like a new birth, my love is
still slime and blood.
Come
for indeed the small yards
will be covered by insects and light.
I laugh for you.

I laugh for you.
The black locust
receives us today
with cool evening drink.

Note: The Black Locust,  technically known as Robinia pseudoacacia (Persian aqaqiya), this tree, found on many streets in Tehran, is also called the false acacia and the black locust. Its flowers are used to make a drink for those who cannot afford cold drinks.

WHAT YOU HAVE READ SO FAR

I said: I have received a letter. It ordered me,
at such and such a date and such and such a place,
to join another group
and move to city B.
The letter’s author was unknown.
I checked an atlas, and could not find city B.
Two days later, my friend, Raha
passed away tragically.
He had received the same letter just before he died
he had said the night before
he had dreamed of a bird,
resembling a hoopoe.
The next day this bird
entered my dream.
I therefore had to join the same group at the stated place.
I said: We were roughly thirty people.
We began our journey.
Along the way
an old man named Allahyar joined us.
We will see what a major role he has.
So a few days later, another group who said
passed that valley. They assumed we were their group
but were supposed to join a different group.
Were we were nearing
the city B
which was nowhere
on the map?
We have reached here.
Anxious of the gradual increase, Allahyar says:
Something must be done, and quickly.
What can be done with this crowd of Laylis
and this herd of men?
And here the story begins …

MY SCENT THAT DOESN’T PASS

Be my metaphor in this inscription,
my scent that doesn’t pass,
my gaze at the grass, that makes a metaphor.

There you sit
atop a stone lion.
The lion gazes calmly,
at the hill below.

Note: In ancient Iranian culture, stone lions signified tombstones, particularly among the Bakhtiyari people. The word used here for inscription, ganjnameh (letter for the treasury), literally indicates a document that specifies the location of a hidden treasure. Taken as a proper noun, Ganjnama also refers to an ancient Iranian inscription praising the Zoroastrian God Ahura Mazda. The Ganjnama inscription is located near a famous stone lion that is also referenced in this poem.

Kayvan Tahmasebian is an Iranian poet, translator, and critic who was born and raised in Isfahan. He is the author of Isfahan’s Mold (2016), on the short story writer Bahram Sadeqi, and Lecture on Fear and Other Poems (2019). Tahmasebian has also translated Beckett, Rimbaud, T. S. Eliot, Ponge, and Mallarmé into Persian. His work has appeared in or is forthcoming in New Literary History, Modernism/Modernity, and Twentieth Century Literature.

Rebecca Ruth Gould’s translations include The Prose of the Mountains: Tales of the Caucasus (2015) and After and the Days Disappear (2016), and, with Kayvan Tahmasebian, High Tide of the Eyes: Poems by Bijan Elahi (2019). She teaches at the University of Birmingham and is the author of Writers and Rebels (2016) and The Persian Prison Poem (2021). A collection of her own poems, Beautiful English, will be published by Dreich in 2021. She will also be one of The High Window‘s Featured American Poets in 2021.

1 thought on “Bijan Elahi: High Tide of the Eyes”