Kim Waters lives in Melbourne, Australia. She has a Master of Arts degree in creative writing from Deakin University and is currently studying for an Advanced Diploma of Visual Art. Her poems have appeared in The Australian, Going Down Swinging, The Shanghai Literary Review, Wells Street Journal, La Piccioletta Barca, The Raintown Review and Nine Muses. She won the 2020 Woorilla Poetry Prize for her poem ‘The Builder’. 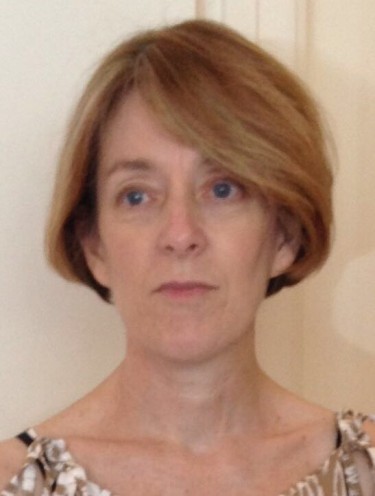 ‘What I love about writing poetry is the challenge of putting my interest in art, music, travel and reading into a form that is bound by the margins of the page. Sometimes it is also bound by verse lengths, line lengths, sounds and white space. My poetry isn’t something separate from the rest of my life. It’s like my desk that sits in the middle of the living room, next to the piano, in earshot of the washing machine, stacked with books – it’s a part of my day to day life.’ (KW)

THE LOST EDGES OF OBJECTS

Trust in a word to be made of letters.
Trust in a letter to consist of words.

It’s a loop, sign-written in the sky,
that gives shape to your doubts.

Trust the sun to clock in, the moon to retire,
water to spiral clockwise.

The order of piano keys won’t change
no matter how often you get the notes wrong.

Trust yourself to get it wrong.

It’s something to put in a holster, a crucifix
hung around the neck, a key hidden
on a lip of plaster above the door.

Trust as much in the night as day.
Trust the lost edges of objects.

The accidental chords you play
have their own solemnity.

The tide won’t falter. The wind will blow.
The trees will lose their leaves.

Trust the wolf you’ve fed to walk beside you.

To go to a sound cave and walk along aisles
of shelves with stalagmites of instruments.

To search for a sheet of music that will be left
inside your piano seat, only to be taken out

for rare practice. To dodge the ukuleles,
violins and violas strung along the ceiling.

To see the likeness of an X-rayed esophagus
in a saxophone or the lung of a Celtic harp.

awaiting a big brass band. To find a metronome
that will step you around the keyboard,

of a young player trying out a new toy.
To move between the cellos with their

hourglass waists. To fall in love with a guitar,
its leather strap draped over your back

like a pop-star’s arm. To place bar-lines
around the heartbeats of a timpani.

To want to lie down and let the vibrations
of a double reed splash against your face.

And then one day you find yourself
on the dada rail between Spain and France
in a town of ice-cubed houses,

a frieze of boats wall-papering the sky,
where your compatriots, deck-chaired out,
sit on beaches, shell-shocked,

caught in the rays of the vagrant sun
as waiters, slim-wasted and agile,
serve tapas with souvenir smiles.

You stroll about the streets, ducking
into shops, door-stoppered by cats,
standing on the pocket of a balcony,

beguiled by a book and a page-turning
view. On the beachfront, you watch
a makeshift troupe of friends throw

colored rings into the air, surrounded
by toweling-necked passersby and
urchins with bellicose, operatic faces.

Cadaques: the place you’ve come
to whitewash memory and slip,
like a Dali watch, into vagary.

Sunburnt, in an open-air
café, we sip Prosecco
with peach nectar

and ruminate about
God, Italian food
and the coming election

as a line of children,
dressed in matching tee-shirts,
cross over The Devil’s Bridge.

Later, we meet them
in the marbled nave
of Torcello Cathedral

and over the tops
of their cherubic heads,
scrutinise the visages

of their forebears
trying to work out
who of the apostles,

in the apse below
the Virgin Mary,
betrayed the Lord,

wondering whether
it is possible to tell
from the feint of

a red brush-stroke
where evil lies
and goodness resides.

A bridge of trinkets,
chained in silver,
where lovers come
to safeguard their love
with initialed keylocks
and spend an hour
or two, in a garden
of jewellery –
filigree, roses
and lily of Florence.

From north to south,
over the Fiume Arno,
spans a band of gems,
a rainbow sunset
to walk over and feel
the alchemy of
the goldsmith’s solder,
turning the tourist
dollar into something
promising eternity.

But later that night,
when the lovers
return to their
key-carded rooms
and the merchants
retire, the locks will be
removed by a team
of metal cutters as
the water laps between
the stone pillars.

Not much to it, I thought.
Just a small worm,
pustulous and
covered in black hairs,

churning its way
through a straw basket
of white mulberry leaves.
But as I stayed and watched

it crawl on its tiny crockets,
prolegs with small hooks
attached to its abdomen,
and read more about

the four molts it would go through
before weaving one long
914 metre thread
around its spongy body,

I thought of all that dormant beauty
contained in one round vessel,
one tulle cocoon,
one mercurial womb.