Rodney Wood worked in London and Guildford before retiring. His poems have appeared recently in The High Window, Orbis, Magma (where he was Selected Poet in the deaf issue) and Envoi. His debut pamphlet, Dante Called You Beatrice , appeared in 2017. He is joint MC of the monthly open mic nights at The Lightbox and is also the Stanza Rep for Woking. You can find more information about Rodney and his work at rodneywoodpoet.wordpress.com

‘I always look with admiration at poets like  Ken Smith, Matthew Sweeney or Paul Durcan who have a unified voice, vision and form in which they can express themselves. I can’t always do that but every now and again I try a new style. Between January and March this year I wrote poems that were short, simple, dreamlike and had a bitter edge before moving on to something new. I console myself with the thought that success is not the number of books or poems published but having the time and space to write. I think you should take poetry seriously but never yourself.’ RW 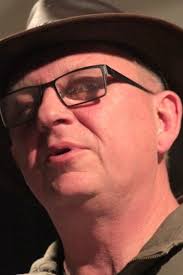 THINGS I TOOK FOR GRANTED

I edge along the wall of your house
until I find the brick that sticks out.
Gently I pull it free
& find hidden behind
the fragments of your memory

towards the saltwater
of urine, tears & alcohol

ACCEPTING THE INEVITABLE
For Jim Lindop

BODY OF THE BELOVED
‘We both knew we were doomed.’ Jessica Piazza

A simple sermon from the pulpit
convenient shorthand for uniting
man and god, man and woman
the lover and their love
even this life
xxxxxxxxxxxxxand the one before

autumn is falling
and wind threatens
clouds, leaves and feathers

pain is silent
says a stone
calmly reading the grass

beauty is seeing through
all this stuff and nonsense

I wonder if our mothers
and fathers are related?

the sun has fallen
beneath the waist
of the dark horizons

I’m smiling the way
only skulls can smile

I must write the last line
before I leave this poem

1 thought on “Rodney Wood: Things We Told Ourselves”