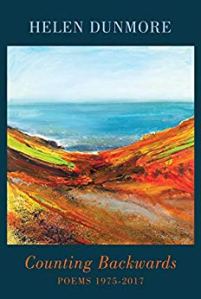 Helen Dunmore, who died in 2017 at the early age of sixty-five, first attracted attention as a poet with The Apple Fall, her debut collection from Bloodaxe in 1983. Subsequently, with the publication of Zennor in Darkness, she established herself as a popular and much-admired novelist. She was, however, almost unique among writers in continuing to devote herself with equal distinction to both genres. In fact, the ambiance and impact of her novels were almost certainly enriched by her gifts as a poet, just as her work in prose may have enhanced the clarity and focus of her poetry. Take, for example, the opening lines of ‘The Marshalling Yard’, the first poem in The Apple Fall:

In the goods yard the tracks are unmarked.
Snow lies, the sky is full of it.
Its hush swells in the dark.

Grasped by black ice on black
a massive noise of breathing
fills the tracks;

cold women, ready for departure
smooth their worn skirts
and ice steals through their hands like children
from whose touch they have already been parted.

As if this were the opening of a novel or short story, the scene is presented in a few spare details that point towards a narrative of trauma and loss. In the 1980s there were others, one thinks of Andrew Motion or Tom Paulin, who wrote poems  that rubbed shoulders with the short story, but none more variously or impressively than Dunmore in ‘The Polish Husband’ and ‘Annunciation off East Street’ from The Apple Fall or ‘The Brides’ Nights in a Strange Village’ from The Sea Skater (1986). However, to highlight Dunmore’s skills in the narrative mode should not lead one to underestimate her work as a poet of personal experience.

Unusually, for a collected edition, Counting Backwards is literally a retrospective volume, opening with Inside the Wave, her final collection, and then working back to her debut. Inevitably, in her final volume we find her trying to come to terms with her own mortality, as here in ‘The Underworld’:

I used to think it was a narrow road
from here to the underworld
but it’s as broad as the sun.
I say to you: I have more acquaintance
among the dead than the living
and I’m not pretending.

‘Inside the Wave’ is another poem informed by classical mythology in which we see Odysseus at the end of his life’s journey: ‘Yes, Odysseus opened his mouth / And all that was left / was the sound an old man makes / Between a laugh and a cough.’ ‘In Praise of the Piano’ is a poignant and original re-working of the carpe diem theme: ‘In praise of the unrepeatable, the original, / the one thought clinging to the one word / I dip my nib into the ink well …’ Most powerful of all, in its unquestioning acceptance of the inevitable, is ‘Hold Out your Arms’, the last poem she completed, barely a fortnight before her death:

Death, hold out your arms for me
Embrace me
Give me your motherly caress,
Through all this suffering
You have not forgotten me.

As she grew older and then terminally ill, Dunmore’s poems became sadder, wiser, and more devastatingly beautiful. Nonetheless, all her poetry is of a piece as, over the decades, she returned constantly to certain key themes. Particularly notable are those poems in which she writes about her children, at all their ages and stages. Here are the opening lines of ‘The Duration’:

Here they are on the beach where the boy played
For fifteen summers, before he grew too old
For French cricket, shrimping and rock pools.

In  ‘February 12th 1994’, she explores the unique bond between a mother and the child she has borne:

Few have written more convincingly of the pleasures, pains and worry of motherhood and, occasionally, in some of the earlier poems its frustrations: ‘Now I’m desperate for solitude’ she exclaims in ‘Approaches to Winter’, lamenting also her ‘absent poems’. In ‘Ollie and Charles at St Andrew’s Park’, she is like one of the young mums in Larkin’s ‘Afternoons’ who feel that ‘Something is pushing them / To the side of their own lives.’ More often though, children are a source of joy, especially when in ‘Scan at 8 weeks’ she addresses her unborn daughter whose unexpectedly late conception makes her exclaim: ‘I’m much too old for this // and you’re much to young’. However, one of her most haunting poems on the theme of parenthood is ‘The Malarkey’, a worthy winner of the 2009 National Poetry Competititon, in which she explores that sense of loss one feels when the children have grown up and left home:

Why did you tell them to be quiet
and sit up straight until you came back?
The malarkey would have led you to them.

You looked away just once
as you leaned on the chip-shop counter
and forty years were gone.

Allied perhaps to the satisfactions of parenthood is Dunmore’s celebration of domesticity and the unremarkable lives that most of us live. In ‘The Place of Ordinary Souls’ she moves from Homeric fields of asphodels in which the ‘unheroic’ spend their afterlives to the bus that ‘shuttles all day long / With its cargo of ordinary souls.’ Of all the numerous birds that feature in Dunmore’s poetry, she praises the dunnock for being ‘mouse-coloured, unglamorous’; while in ‘Nightfall in the IKEA Kitchen’, she finds an unusual objective correlative for an unalloyed sense of  contentment: ‘A life so sweetly cupboarded / / I barely believe it’s mine.’

Counting Backwards is an extraordinarily wide-ranging and rich body of work. Beyond its more personal ambit, mention should be made of Dunmore’s poems about nature and her environmental concerns, most fully explored in her 1988 collection, The Raw Garden.  In ‘Mortgage on a Pear tree’ we see how man crudely exploits nature for financial gain: ‘ The owner grew wasteland  and waited for values to rise.’ Nature was, moreover, an endless source of inspiration for her: its landscapes, flowers, insects, birds, all of which provided her with a rich trove of metaphor and some of her loveliest images. In ‘Bewick’s Swans’, we have ‘the soft dawn chill on a feather’. Elsewhere, yellow butterflies are seen as ‘the sun’s fingerprints on grey pebbles’.

In her late poem ‘Odysseus to Elpenor’, Dunmore evokes the elusive figure of Elpenor who, as a shade in Hades,  makes a brief appearance in the Odyssey merely to ask that back on earth a burial mound be erected for him so that his name will not be forgotten. Helen Dunmore died at the height of her powers and far too young. Fortunately, for us at least, she has left a body of work that is distinguished by its affirmation of life and its celebration of language. She is unlikely to be forgotten for as long as there remains a discerning readership for poetry.

David Cooke is the editor of The High Window. His latest collection, Reel to Reel, was recently published by Dempsey and Windle.