In this week’s HIGH WINDOW feature, the first since the publication of our full Spring issue, we are showcasing work by Rose Cook, who  has four new poems in our summer issue and whose most recent collection, Hearth, is  available here from Cultured Llama Press. As well as being published widely in anthologies and magazines, Rose has written four poetry collections. Originally from Yorkshire, she is now based in Devon and is a well-known South West poet, having performed extensively. Rose co-founded the popular Devon poetry and performance forum One Night Stanza, as well as the poetry performance group Dangerous Cardigans.

Further information will be found at www.rosecook.wordpress.com 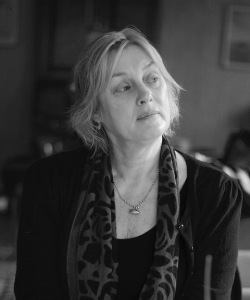 ONCE BESIDE A TIME

At the pool with its sludge-tracked
changing rooms and clammy air
smelling of people no longer there,
someone’s goggles hang from a hook.

I squeeze myself into a black number,
make like I’m dancing and turn
to find my own ghost with my children,
a hundred echoing visits – undressing,
scrambling clothes into lockers.
Don’t run. Don’t slip.

I am in no hurry.
I slide in at no beat, pointed as a knife,
till I am green shimmer
and way over my head.

For deep memory, we must learn
the language of bees, investigate hive-life –
how winged atoms make honey and store-cells,
how wax will only generate when the wax-makers
lie together for hours, quiescent, in great heat.

Comb-building takes place at night
at the borders of language and dream,
when the dead come back to talk.
Sometimes memory’s partitions melt,
we get to uncover bricked-up fireplaces.

We have a need to remember what is lost,
find it hard to fly the crowded hive,
leave it all behind.
When a store-cell opens,
wild hope bends an ear.

(Taking Flight was published by Oversteps Books in 2009)

Two Poems from Notes From A Bright Field

ON LOVE AND AVIATION

And so as we take off
the cheerful man in the seat next to me,
with his giant RAF watch
with gold wings for hands
and his crowned winged badge in his lapel
and his blazer with brass buttons,
asks me if I understand the principles of flight.

He takes out his pen
and draws me a diagram on his paper,
explaining in a friendly voice about wing shape,
drag and lift and airflow.
It is all a question of balance.

I understand.
It is the same impossibility with love.
Later, I point out the light auras on the propellers,
how they look like cartoon drawings.

Ah yes, he says, the haloes
and he smiles.

She should have let him go ages before
he asked her, several times, I heard him,
but she stood thigh deep, her small hands on
the prow of his boat, offering instructions
in a gentle voice, as an air hostess does before
take off, her own fears chained together
like clauses and carefully wrapped around
as fast as he tries to cast off, until he can
take it no more and shouts to her to let go
and to shut up since he knows more about sailing
than she does, so she stands with her arms
at her sides, watching, while the wind takes
her son and his orange sails and carries him out
far on a run, so he cuts through the slate sea
not looking back, but we can just hear his voice:
I know far more about sailing than you do.