Denise  Bundred was a consultant paediatric cardiologist and has an MA in Creative Writing. She is a Fellow of the Royal College of Physicians. Her pamphlet, Litany of a Cardiologist, was published by Against the Grain Press in 2020. She won the Hippocrates Prize in 2016 and come second in 2019. Her Poems poems have appeared Hippocrates Prize Anthologies, The Book of Love and Loss and These are the Hands.Her poems have also appeared in Envoi, Under the Radar, Poetry Shed, Prole Poetry, London Grip and Magma. 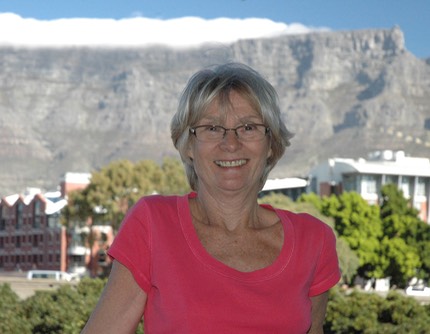 His ear was cleanly severed, apart from a remnant of the lobe —
a strange razor-cut for self-harm if it was as he said.
He fought with Gauguin; that much I knew.

I cleaned and stitched as well as I could.
Inexperience counted for nothing. I was there.
The oils were still wet when I called at the Yellow House.

Why did he clash the colours in the image
of his gaunt and sallow face?
The eyes seemed to show a mind withdrawn

to the darkest corner of his cold studio. A fur-lined hat
covered the bandage I’d secured beneath his chin.
Behind his head an empty canvas waited against the wall,

the Torakiyo print (a copy) pinned beside it —
but he moved Mount Fuji to force himself
between the heights and plains of the two pictures.

He spoke of indescribable anguish, inner seizures of despair.
‘The veil of time is torn apart’ he said.
‘Not easy to take up living again.’

In the portrait, his coat slumped from defeated shoulders
even as lively brush strokes declared his confidence
to the unquestioning mirror.

The new resident appears rational. He strode the floorboards & tried the iron bars on the window. He looked beyond to the enclosed wheatfield. His eyes explored the chamber without meeting mine.

His nails are ridged & broken, his teeth discoloured. Several are missing. A poor diet & perhaps the effect of lead. The puckered scar — it almost reaches the angle of his jaw — is inflamed & raised with keloid.

He accepts that he has unexpected agitations which result in aggressive behaviour. Dr Rey’s letter confirms the fellow’s lucidity but cautions me regarding crises, which occur without warning. I have advised his brother he must remain confined until I can assess him further. He desires to be addressed as ‘Monsieur Vincent’. (We mangle his surname, he says.) His accent is guttural with the Dutch.

He studied the high ceiling & announced, ‘Plenty of space to hang canvases’ but has brought none with him. The sisters chose curtains patterned with pale roses brightened by red to make him cheerful. I understand he values colour. The wallpaper is grey green for calm. 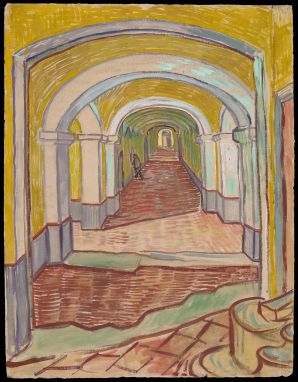 CORRIDOR IN THE ASYLUM

Ceilings soar above monastic arches and pillars retreat to his studio at the vanishing point of this well-worn hallway.

If his brother had seen it, he would have noticed sadness in every brush stroke. Perhaps the solitary figure entering the office that overlooks the neglected garden is a fellow inmate.

Voices follow him to his cell. He says the walls are shouting. He doesn’t understand he can stop bellowing whenever he wants.

He hears conversations in the cloisters, of long-dead monks and patients, until he shuts them out behind his door.

xxxxxxxxMorning light floods the flagstones
xxxxxxxxbut a spectrum of short lines
xxxxxxxxdisquiets the eye — a barrier
xxxxxxxxthat cannot be crossed.

The ancient plaster traps sound and leaches it out without warning. And turpentine — like the aura of a convulsion that may never come. The corridor would make a grand space to show his paintings but the loneliness that flows from it makes his bones ache.

His first vase — it was just a jug — contained dead leaves.
At the time, he was painting peasants, rats, hands and potato eaters.

Scrolling though illustrations of all his work, the film changes
from muted browns to cautious blues.

Paris in ‘86 was his year of flowers — pansies, daffodils, hellebores,
until colour burst into lively daisies, meadow poppies and roses.

In Arles, he used subtle pinks for blossom but the summer’s heat
drove him into vibrant yellows, reds and green.

Later the roses returned as smudges in the garden of the asylum.
Before he was released from that sad place, he steadied himself

to tell his brother ‘Wild irises mean less to me than a metallic beetle,
its six fragile legs clinging to a pale rose.’

He followed this with bunches of them — twice.
And don’t forget a final study in the Musée d’Orsay.

Few remember the roses. That’s not to say there aren’t any!

There’s a room elsewhere that’s brighter
where food appears as if from nowhere
on plates so fine you can shine a light
through them: a feast for the eyes
before the palate succumbs to slick
lubricious juices. While here
they’ll have no truck with a dish
that’s pimped and primped.

For as long as the earth provides
they know they will always survive
on what is dug from claggy acres.
For as long as the fire endures
and the pot hangs on a hook
they will gather quietly around
their table. They peel back the skins.
The soft white flesh blossoms. 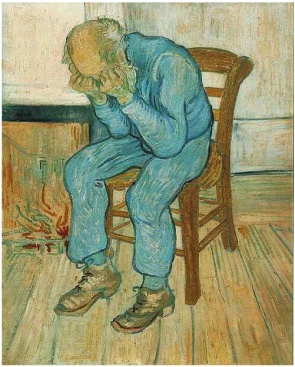 ON THE THRESHOLD OF ETERNITY

This is the room where a man sits alone
on a simple chair, his body slumped
in a pose of bleak interrogation,
his tunnel vision to see each work
as a chart of flawed intentions,
his days locked in the bleared lens
of pointless despair, sensing too
beyond the flames of manic summers
that cold stars are turning,
tuned to a shrill monotonous note.

Any room you like can be a refuge –
with three closed walls and a window
through which you glimpse the world.
One by one the walls collapse,
extending your view towards both east
and west, but then revealing everything
you thought you’d left behind. The low
ceiling lifts into a sky so distant
you forget sometimes it’s there.

All that remains is a window
that you will slowly fill with bridges,
boats, faces, trees, some yellow, white
or purple flowers, the endless waves
of a cornfield above which a handful
of wind-tossed birds
seem to be holding their own.

David Cooke is the editor of The High Window.

Leave a Reply to The Wombwell Rainbow Cancel reply