Vivek V. Narayan is a writer, performance-maker, and performance scholar, currently serving as Assistant Professor in the Department of Humanities and Social Sciences at the Indian Institute of Technology Gandhinagar, Gujarat, India. He recently graduated from Stanford University with a PhD in Theater and Performance Studies, and a PhD Minor in Anthropology. He is an alumnus of Royal Holloway, University of London, where he completed MA Theatre (Directing), and St. Xavier’s College, University of Mumbai, from which he graduated with a BA in English Literature. His writing has appeared in AZURE (3:4, and 4:3), The Caravan, J-CASTE, The Hindu, and Fountain Ink, while his theatre work has been staged in India, the UK, and the US. His work has been recognized by the Bluestone Rising Scholar Prize, the Charles Wallace India Trust Award, Thespo awards for young theatre practitioners in India, and was shortlisted for the Hindu MetroPlus Playwright Award. 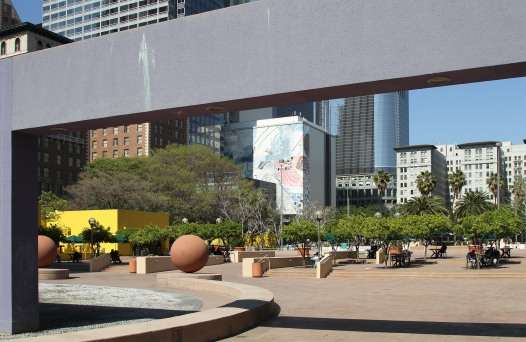 ‘These two poems are taken from a collection called Jet Lag, which gives form to the experience of being both in and out of place. Jet lag dulls the senses: vision blurs, comprehension grows weary, emotional connection feels uncertain, and the solace of intimacy is often inextricable from encounters with strangers. ‘Pershing Square, Los Angeles, 2013’ reflects upon a disturbing trip to LA, where the long-dead Charles Bukowski was the narrator’s somewhat-disagreeable guide, while  ‘Soup’ narrates an intimate conversation overheard in a Californian cafe which offers an insight into the speaker’s loneliness expressed through her food order.’ (VVN)

and all the while the war was rushing
toward us
but somehow nobody argued about the
war
– Charles Bukowski, ‘Pershing Square, Los Angeles, 1939’

I
I had a date with Bukowski on Pershing Square,
amidst the jewellery shops and the pawn-brokers.
We were to skim stones by the fountains,
toppling skyscrapers stacked up against the skies,
over which children skipped crashing into beaming
fathers; cushioned by pot-bellies padded with smiles.

The city was one where the distance between
planets was measured by
odometers. Cars travelled light
years to the black holes where stars went
to die, after their daily walk
of fame shaded by palms
that flew first-class.

Old Charlie arrived hours late, reeking
of whiskey and cheap
hotels,
stale cigarettes and tuna sandwich.
Offering me a pip from his hip flask, he beamed:
‘The war,’ he nodded, ‘The war is rushing towards us.’

At the Observatory, we saw
behind us
HOLLYWOOD
the sign
the starlet dropped from
—’You remember, the suicide case,’
Charlie burped,
‘the one in the wrong line of business,’
he shook his head,
‘She’d picked the sign for dramatic value.’—
and below us,
a sea of thrashing goldfish at feeding time.

II
A chariot drew close,
a bearded sage-warrior briefly stepping out of the fray.
Wheels screeched against the concrete sidewalk,
a migraine-like withdrawal.
‘Hey, you, hey!’
‘Hello. How are you?’
The sage-warrior in his chariot glared.
The concrete beat on my heels: thud thud.
‘Lonely,” he drawled…
Thud. Thud. Thud. Thud.
A buzz rose like a whole sea of temples thrashing
with migraines broken only by
angry cars hurrying, carrying stars
back to black holes across light years.
His voice became my shadow,
trailing me as I marched to the beat of
the insistent sidewalk:
‘Lonely
as a vulture
that’s picked out the last
eyeball off the last
dead soldier.’
I walked on: thud thud.
Thud thud. Thud thud.
Thud thud

Charlie raised a smug eyebrow, and silenced
himself with another pip from his flask.

Oh I see it, Charlie.
I see it in the Latino markets—3 for 5!—
the war,
stacked on white shelves
guarded by the Virgin.
She beckoned to me from
across the cream-coloured candles.
Through the red gauze veil
she whispered,
spraying hot wax in my ears,
‘The war, the war is coming.’

In jewellery shops, I see the prophets
had left signs foretelling the battle:
‘This shop has limited amount of cash.’

Charlie chuckled as he stole another swig of rye.

III
We sat outside a cafe, catching our breaths.
Charlie went to stink up the toilet with rye and cigarettes,
when an old lady—dressed in parrot green dress with matching hat—
came upto me,
twice.
‘You got a dollar for me?’
The second time, I said—not unkindly, I hope—
‘But I just gave you a dollar.’
She paused, and softened,
the ghost of an old grandmother flickered into her glazed eyes,
then recognition shone hard:
I was The One Who Did Not Get It.
She hissed, ‘A dollar ain’t gonna buy me shit.’
It was, she said with pride,
the kind of city where you had to beg twice as much.

Charlie, glaring at the old lady shuffling away,
then at my blank face, and back again at the parrot green blur,
burst out laughing:
‘The war,’ he exulted, ‘comes in many forms.’

IV
Past midnight, a man sidled up to me
dragging a leg behind him
as I stood smoking outside the seedy bar
watching Charlie piss in the middle of the road.
‘Any change?’
I shook my head.
‘A smoke?’
As I lit the cigarette I gave him, he
smirked and flicked off
my pathetic kindness, like
ash from a burning tip.

Charlie’s mad laughter shattered the window panes above
as he leaned on me—too much whiskey—
and puked:  ‘Look, there, it’s coming.’

V
A battered tank cruised the battlefield:
Jacob, the Armenian taxidriver who worked
two jobs, told me, turning back to
look at me as we sped along loops.
‘Those two towers,’ he mourned,
‘They fell on us.’

Jacob had flown on a ladder from the sands of his land.
His broken ladder had been a bridge
between the drought back home and a dream
of water.
‘The crashing towers, they filled our mouths with dust.’

The dream would never let him leave;
the drought back home would never end.
After a long loop in dizzying silence,
he pulled up at the airport,
‘This is it, then,’ he laughed,
‘heaven or hell.’
His son, he added with pride,
knew that he was to be buried with his ancestors in the sand.

Old Charlie left the car
like vomit from a drunk,
mumbling, by way of farewell:
‘It’s coming.
And brings
no glory.’

Under the determinedly rustic collonade
of the equally determinedly French cafe
with ‘Bonjour!’ cheering next to
a black-and-white baguette
printed on a flourescent green card
pasted on to the cash machine,
even the waiter’s casualness and
lack of cheer a contrast
to the sunny disposition
of waiters in California,
I sat watching three ladies:

the first, most glamourous of all, in kneelength white loose linen
paired with white leather and tan flat-soled sandals
whose lone buckle was beautifully fashioned with
some dark arts
and a bag from India
embroidered with mirrors
and filled with
a lot of room
for which she probably paid ten times its price;

and the second in baggy zebra print shirt and
white linen calf-length trousers and
—alas—bathroom slippers;

while the third, in pointy shiny flatsoles,
its lack of comfort a contrast to her dress,
a dark maroon sleeveless collarless,
like a cocktail dress crossed with pajamas,
a going-out dress that stayed home after all,
upon being
gruffly served her
bowl of soup (at 11.30am!),
remarked,
‘Now I have to get
used to cooking
for one, so
I just do
soup all the time.’

and the second,
settling her feet nice and easy in her bathroom slippers,
patted:
‘You get used to it.’