Stephanie L. Harper earned her M.A. in German literature from the University of Wisconsin–Madison, and will begin studies in the M.F.A. in Creative Writing program at Butler University, Indianapolis in the fall of 2019. Stephanie is a Pushcart Prize nominee, author of the chapbooks, This Being Done  (Finishing Line Press) and  The Death’s-Head’s Testament  (Main Street Rag), and recently judged the 2019 AWP Intro Journals Prize in Poetry. Her poems have appeared in numerous journals and anthologies, including  Slippery Elm, Isacoustic*, Underfoot Poetry, Eclectica, Cathexis Northwest, Prometheus Dreaming, Stories That Need to Be Told (TulipTree Publishing, LLC), and The Larger Geometry (peaceCENTERbooks). 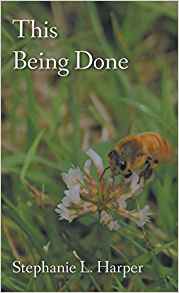 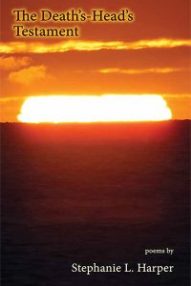 You can learn mopre about Stephanie and her work here 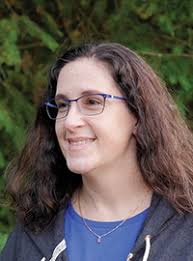 Some things leave no room for misunderstanding,
like your climbs to the tops of towering pines,
and your belief that you can never cry.

At age five, you dream of a woman
with wings like a bat dressed all in black.
She swoops down, grabs you, pins you in her lap,
and while hitting you over and over, she’s whispering
that it will end when you stop struggling;
so you pretend to relax until her grip loosens
and then you fight to escape, but each time
her strength overwhelms you. It takes
several beatings before you realize
she is trying to help you, she is teaching you
how to be brave—
how to be so still
that you can let yourself have no feeling
when the scratchy hands are pressing into you,
like the night lets itself be swallowed by darkness.

An eight-year-old now, you’re standing
outside their locked bedroom door, waiting
for your mother to call to you
as he yells his nonsense, rips out drawers,
and slams the walls with his fists.
When something made of glass shatters
against the vanity, her cry of surprise
convinces you to call the police.
They come and go in a flash—
barely pausing to ruffle your hair
and chuckle
that it was all “just a misunderstanding”—
and they leave you there,
to keep being unseen.

For most of the schoolyear,
at age eleven, you are chronically ill:
the oozing, itching, gray-swollen chickenpox lesions
that make you potently untouchable,
lead to an infiltration of fevers, flooded lungs,
and inflamed tonsils and ears
that hold you prisoner from the inside,
but soon you come to know your captors
as the oddly loyal, untiring allies
who keep you warded at night, for months.
Your classmates are jealous, though,
that you still make passing grades
in your constant absence from school—
on the phone, they accuse you of faking,
and you can’t help the feeling, either,
that being sick really is a kind of cheating,
like getting something you want
without doing anything to earn it.

Mom is taking you to open a bank account
with your own passbook, though you’re just twelve
(her eyes are still swollen from crying yesterday),
so you can sign for the money you’ll need to get
yourself and your little brother to the airport
to fly to an uncle you barely know in New York,
if she either goes missing, or you find her dead,
because, as she’s confided to you—
and you have no reason not to believe it—
your father vowed to kill her.
For the next three years, then (she doesn’t know),
you skip lunch at school and save the money
to deposit into the ‘plane ticket’ account.
No, she never gets murdered,
maybe even because you always keep watch,
like the kind of parent you’d want to be would,
even after your father finally moves out
during the same summer you get your tonsils
(and the disease they harbored) removed.

You’re now proving to be a picture of health
(though you bear the hunger of indignity, standing
in lines in the school gym for government hand-outs
of peanut butter, processed cheese and expired bread),
because you can run like no one else.
You are your soccer coach’s favorite, you believe,
because you are tough, and you work the hardest.
He makes a fuss over you like you are special,
takes you out for ice cream, has you come along
on fishing trips with his sons, and invites
you over for dinner, or to stay the night,
and you never consider he’ll expect you to repay him
for these casual, kind gestures, until
he’s suddenly always touching and hugging you
as if it is his right, and even though you make sure
only to be in public places with him,
in plain sight of your teammates’ parents,
you can’t discourage his lewd hovering,
or his propositions (which he thinks are charming)
for you to fuck him in the back of his van.
Somebody should be watching!
Somebody should be watching!
People are watching, but they only see
the things that have no need
for invisibility, like the crude posturing
of a man just being a man—

just someone who reserves
the Scouts’ clubhouse through Parks and Rec
for a ‘team meeting’ that you feel obligated to attend;
someone who waits on a weekday evening
in a prefab aluminum building
with the lights dimmed
for a fifteen-year-old girl to enter alone,
while, at home, his own kids watch T.V.,
and his wife keeps his dinner warm.

Some things leave no room for misunderstanding—

like the lust throbbing in a man’s neck,
the presumption gleaming in his eyes,
and the fact that wrongs always pile upon wrongs
in the same way he now heaps this assault from behind,
with his thick hands fumbling for your breasts,
on top of his preposterous lie;

and so when he leans in with his belly
and his cock stiffens against the small of your back,
a scream gets trapped in your throat,
and you find yourself struggling wildly—
you elbow him hard in the ribs,
then rear up and ram your head into his chin,
and somehow stun him long enough
to get away—

you get away,
but leaving yourself there
unseen in the dark
doesn’t ever feel brave.

I’ll admit to being fickle—a variable
ally of predators & prey alike—
as I’m no less liable to marvel
at the grit of a barn cat stalking a fat vole
(& then to cheer at the rodent’s brief death-throes squeak!)
than I am to release a breathless prayer into the wind
for a crab scuttling frantically ocean-ward
in the shadow of a whimbrel

There is only this
futile transit of hours
to successive hours—

this exodus
of blood from its native heart

Dithering at the edge of this rushing stream,
I kneel down upon a flat stone, & look
to the far bank, where bald cypresses scratch
away daylight’s haze with their downy leaves,
making way for the dusk scuttling in. Damp,
throaty pleas from distant grackles empty

through the sky’s sieve of boughs like the empty
murk drizzling through silt-swaths into the stream.
I’ve come here hoping to find this old, damp
chapter’s end, hoping to learn how to look
ahead without losing sight of the leaves
I’ve trodden to an ashen sludge. I scratch

at chiggers before they can burrow—scratch
sweat from my nape as if I could empty
the universe of salt, drain summer’s leaves
of their boisterous sugars, or strip the stream
of frogspawn after spring’s first bloom—& look
back for the shadow I left in a damp

heap of my childhood long cached in the damp
back alley I’m still known to haunt. Why scratch
that phantom from time’s face when you can look
deep & reclaim yourself from its empty
eyes? Why has this night drawn me to the stream
to dither with the moonless, shushing leaves?

Cockroaches amass dander in the leaves
by virtue of dwelling here, but my damp
bones know no comfort of home by this stream,
so I’ll sharpen no fallen branch to scratch
my name on a grave meant to stay empty.
I’ll skim the cold current’s surface, but look

elsewhere for solace—some shorelines will look
hostile no matter your vantage; some leaves
autumn’s breath sets afire are just empty
futures snuffed in the throes of death’s blaze. Damp
today’s fresh fodder with your scythe, & scratch
the mercy of flame from tomorrow’s stream.

I look beyond the cypresses’ damp banks,
past their pall of leaves & twilight’s last scratch;
watch night’s empty gullet devour the stream.

My sixteen year-old daughter wants
dessert at ten o’clock on a Friday night,
so right there & then, her dad tells her to grab
the baking recipe book, has her check
the cabinet & fridge for ingredients,
helps her assemble the list, & proceeds to haul
their two derrieres to the grocery store.

I come home, a bit cranky, from a mandatory
parents’ meeting at the kid’s acting school
about things I’ll be hard-pressed to remember,
to the exuberant sounds of eggs being cracked
on a mixing bowl’s rim, bags rustling, a ring
of plastic measuring spoons clacking together,
an ancient, unwieldy electric mixer splattering
sugared butter across the kitchen, & two voices
bantering in their exclusive dialect of contentment.

The oven signals the completion of its preheating cycle,
& the girl capably slides the glass bowl filled with
white batter—yes, they’ve even separated the egg yolks
from the whites at nigh eleven o’clock at night—to create
a cake in the shape of a half-sphere, which will, of course,
be covered with frosting (covered, to my mind, being
the operative word)—though, not just any frosting, you see,
but a certain grey shade of frosting, because this is not just
any cake now baking at long-past-eleven o’clock at night…

& so it remains for the half-sphere to be tipped out
of its Pyrex to cool in the vacuum of space; next, to be
bombarded with ice cream scoopers of multiple sizes
to simulate the impact craters on the satellite’s surface
(while wry husband offers me bites of ‘ejecta’ to snack on);
& finally, for the halved planetoid’s pocked regolith to receive
its lifeless lacquer—at which point, awash in the lunar sunrise
of my daughter’s one o’clock in the morning smile, I will consider
the myriad aims of which I’ve spent my decades falling short;
that is, until I suddenly have the presence of mind to realize,
by god, I’ve done something right in this life—

the precious girl I brought into this world
has a dad who can give her the moon.

*’Brave’ was previously published in Stories That Need to Be Told. TulipTree Press. 2016.

*’There is this’ was previously published in Harbinger Asylum, Fall 2017.