Steve Lambert’s writing has been published widely in the United States and beyond. appeared,  He is the recipient of four Pushcart Prize nominations and was a Rash Award in Fiction finalist. He is the author of the poetry collection Heat Seekers (2017), the chapbook In Eynsham (2020) and the fiction collection The Patron Saint of Birds (2020). His novel, Philisteens, will be out May 2021 and his next poetry collection, The Shamble, will be out in October, both with Close to The Bone Publishing. He lives in Northeast Florida, with his wife and daughter, where he teaches part-time at the University of North Florida.

What people have been saying about Steve Lambert’s poetry. 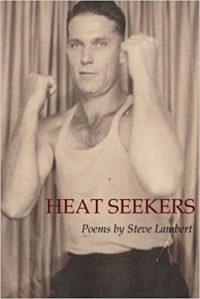 “In this bold and brilliant debut collection of poetry, Lambert drags his ambivalent pen across the vast human field of the sacred mundane and the quietly profound. With the unapologetic scrutiny of an investigator, he zig-zags in and out of the margins of his own  experience, and the people who populate his world. From Southern Illinois and down into Florida, the poet leaves no landscape, physical or emotional, unexplored, and he does so with a rare kind of nonchalance not written since the mayonnaise days of Richard Brautigan. But in Lambert’s case, the wise poems that make up Heat Seekers, are less concerned with whimsy or cleverness, and more concerned with illuminating the particulars, ‘something to fit in the back pocket of your mind / a small worthwhile thing.'”

“Lambert offers a powerful vision both contemporary and primeval. Heat Seekers is at once subtle and penetrating; a tightly-woven, take-nothing-for-granted poetry with equal amounts of craft and heart. From laissez-faire crystals to family odes; gas station romanticism to dark solipsism; each section collectively offering an insight into time and place. “

We arrive, airplane-travel weary, drink pints
of Carling in the courtyard out back where rabbit
shit dots the tuffets of green grass. The bar and dining room
grope in the shell of a sixteenth-century barn.

We are on our way to Canterbury
and on and on westward from there.

The rabbits, the size of Scottish Terriers, come out
in the afternoon and watch us drink, like the prelude
to an incursion, a scene from Watership Down,
but they keep their distance.

Behind the courtyard, beyond the leering rabbit mob,
one of England’s many River Wyes dies down
to a murky piss dribble. This place is beautiful, but sad,
like a shrug before a sob.

Back inside Tommy, the young bartender, watches
us while his boss watches him spend too much time
with the Americans. The regulars give us “Slaughtered Lamb”
looks. “Wait,” says Tommy when his boss disappears,
“you don’t have Roundabouts in America?
How do you know where to go?”

“Look,” says the young man
in a tracksuit and a house-arrest anklet,
“Americans.” His two friends
smirk at us. Next to a white Ferris Wheel
and willows with pageboy haircuts
that line the Avon, I consider
our conspicuousness. “Keep cool,”
I say to myself. “You don’t want
to get your ass beat in Shakespeareland.”

We walk down river
to the Church of the Holy Trinity,
where Shakespeare’s buried.
“What’s this,” says Abi,
“the place where Sherlock Holmes
was born or something?” We say
things wrong on purpose.

Inside it’s cramped. I can hardly
breathe, and it smells like age upon
age of ripe, shuffling humanity.
There’s something distinctly
undignified about everything,
something tragic, Shakespearian.

On the River Stour a college boy
walks upside down under a bridge.
Punters and rowers all around
tell the city’s unofficial history:
ghost stories, pub brawls and crawls,
murders. The ghosts of black and grey
friars prowl the narrow streets
like night cats. I see a tall beautiful
young lady standing on the bulkhead
whose look is so distinct I try
to imagine her life but stop when
it gets too sad. She stands and lets
the human current rush around
the towering rock of her body.

An interior decorator’s eye is needed here,
or maybe just a sullen teenager
to paper the walls with glossy posters,
fill the room with languid cigarette smoke.

The light in here is slow and heavy,
almost stroboscopic.

Men and women sway silently in their chairs
like leaves of grey turtle grass in a cold current.
They’re not, technically, dead.

It’s true, they never let us forget,
Things could be worse.
“At least we have jobs” is cliché.

You sometimes hear a heart throb
or a groan of adolescent impatience,
but no real war cry. During a ceasefire
you venture in for a closer look: a carnage
of wrinkled clothes festoons her room,
and the illusive ache of loathing loiters
like teenagers at a convenience store
door. One long, sad love song on a loop,
the battle hymn of this untidy republic.
You remember a time when this realm
belonged to anyone who entered it,
a gleaming open society, not a Utopia,
but close, and as unreal as the unicorns
and fairies that inhabited it. This was no
war-torn outland. But daughters become
young ladies and may hate you for a while,
even if you painted this room ocean-blue
on request when she was eleven and
assembled the dollhouse that leans in
shambles in a far corner, a pink Grey
Gardens for hairless, one- armed Barbie
and naked Ken. Even if you were, as you’d
promised yourself you would be, nothing
like your own father and gave stability.
Stability was what you had wanted. But
what you did or didn’t doesn’t factor
into it. This is a feral land now, FTW etched
into a drawer of the monolith dresser.
The dialect a little different, with a subtle
Bite. “Daddy” has given way to “Dad.”
Still nothing truly dangerous ever happens
here, only the occasional virginal shot at
promiscuity with a boy too shy, thank god,
and awkward to give her anything to fight for.

She bought it and hung it
on a high limb of the loquat
tree in our back yard.

A blue jay came first, fat
and quick, and knew what
to do. Then two cardinals

flew in, an old married couple,
learned in the ways of birdfeeders,
and joined in. Then a lone dove

lit lovingly on a branch
just above the small menagerie
and studied how. This was

no performance, but
a kind of unselfconscious
laissez-faire avian harmony.

For a time, a calming rightness
reigned here—then the squirrel
came, seemingly from nowhere,

and jumped on top of
the feeder, scattering the birds
in a shockwave of birdseed,

as the feeder hit the ground
hard. I sat bemused in the aftermath

of its anarchy and watched
the tawny rodent forage.
I did not intervene, and,
in the right light, we all
got a little something.

Florida, late summer, about to rain
or is raining or has just stopped. It’s something
you come to terms with or love anyway.
Maybe it’s why you’re here, where
your divining rod has led you.

I’ve been learning how not to hate
for the last sixteen years, been learning
the rhetoric of love through immersion.

But they’re lodged in me like a fossil fuel,
meanness and cruelty: so much accreted awfulness.
There’s love, too, though, fathoms of it. I’m trying
to unbecome what makes me unbecoming.

We all go undiagnosed with some ill, and the rain
will never stop, only subside and come again, and,
anyway—don’t you love a good deluge?

Love is not self-sustaining.
Just ask your spouse who has hated you
more than anyone has ever hated you.
This is why you, Reader, must do, at least occasionally,
some rare thoughtful thing,
such as the for-no-good-reason flower purchase.
Fix it, whatever it is, before they ask.
Don’t make them love you from scratch all over again.
Give them something to build off of.
It’s a little work, is all. Love’s a little work.

Back to to the top