D. Nurkse was born on December 13, 1949, in New Jersey, the son of Estonian economist Ragnar Nurkse. He received his BA from Harvard University in Boston, Massachusetts, and worked as a factory worker throughout the 1970s. He has also worked as a construction worker, grant writer, human rights representative to the United Nations, street musician, kindergarten teacher, translator, bartender, and harpsichord builder, among others.

You can read a short review of Love in the Last Days: After Tristan and Iseult here. 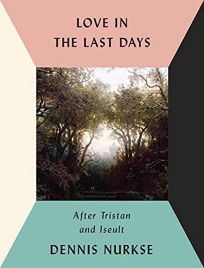 You can also see and hear  Dennis reading three of his poems here at the Academy of American Poets.

In his review of A Night in Brooklyn, poet Philip Levine writes: “He possesses the ability to employ the language of our American streets, shops, bars, factories, and any place else and construct truly lyrical poems, sometimes of love, sometimes of anger.”

Nurkse’s honors include awards from the American Academy of Arts and Letters and the Whiting Foundation, as well as fellowships from the John Simon Guggenheim Foundation and the National Endowment for the Arts. He was appointed Brooklyn poet laureate in 1996 and served in the position until 2001. Nurkse has taught poetry at Brooklyn College, The New School, Rikers Island Correctional Facility, Rutgers University, and University of Southern Maine. He currently teaches in the MFA program at Sarah Lawrence College.

If the universe were infinite
we’d be flooded with starlight
she says, buttoning her blouse –
such small fabric-covered buttons,
so delicate a touch – her voice
muffled by a pin in her lips.
A little hoarse. We made love
and I drank the sour Malbec
I’d hoped to give up.

For a trillion protons of antimatter
a trillion-plus-one of matter
and she loved me carefully,
wittily, brushing her hair back
so I could see her face
by the erratic lights of passing cars.

At dawn I’ll try to convince her
I’m kind, I’m honest, I suffered,
but my voice will be a burden on her
and quicksand to me.

For now it’s dark, darker
in the gleam of her phone.
The mind is not infinite.

There was someone standing between me and the music, making the gestures indicating: delight, sorrow, skepticism, grudging admiration, awe – a conductor of my own emotions?

Beyond that august slightly stooped back, that peremptory baton, the musicians labored to obey, floundering in tight tuxes, visibly terrified of losing the count when their patent-leather shoes pinch (in the heat of the footlights your feet swell, you can’t prevent it) – timpani and tuba aging a hair in the fast passages, counting to themselves even when the piece was finished.

I’ve tried to track the maestro down, in the corridors behind the concert hall, in the maze of dressing rooms, the sound-proofed rehearsal cubicles, to ask how he does it? So perfectly, the distracted augmented chords just when my mind was about to wander? When I miss my wife, the theme veering to a radical minor? If I sneeze, the motif stating itself, tremolo, rubato, sforzando?

All I found was a third bassoon, packing his instrument in an outer corridor, unwilling to stop sucking his reed, who pointed with his thumb to a brass-studded door sealed off by a velvet rope.

Yet I’m sure I’ve seen him once or twice, on the street, on a bus, on a rainy evening, an old man absorbed in being an old man, his white mane trembling in the draft, the score rolled under his arm.

When I introduce myself, perhaps a little defensive, worried at violating his loneliness, already qualifying my admiration so I won’t seem cultish, his lips just flutter in the count.

He gestures to the broad streets – gold dome of the capital, museum,  warren of factories – and swiftly, in perfect order, they too vanish.

The face in the mirror has come to power.

It sits in its office signing orders or ripping up treaties. The light in that window burns all night.

By day it reviews the troops. It assembles Congress and gives them a tongue lashing. If they fail to meet that cold eye, if they yawn or look away, the thin high voice begins to quaver-–with what? Rage? Desire?

My countrymen love it. They come from the failing mill towns and wait in line for one glimpse of the fan-lights of its limo, long as a monster dachshund: one flash of a bodyguard’s dark glasses.

Still it’s me in reflection… raise my left hand, it brandishes its right: try to touch it, cold glass intervenes: whorl of my thumbprint, its stubborn cloud of breath. Surely its viciousness makes me kind?

When it begins to fail, when it stammers and clenches its fist, it’s my vision that blurs. When its syntax wanders, I forget my way home. When its shirt comes unbuttoned, when its forehead streams with sweat, when it shrieks for the fire, a great dizziness swings me off my feet and I begin turning. I who hated no one.

When I was a child, it was no one, corkscrew of whirling leaves, the swing soaring up.  Its face was the breeze.

But now, how long the flesh takes to lumber to the other side of the mirror, masked in happiness, masked in grief, apologetic but absent. Sometimes it doesn’t make the appointment at all.

Endless city, avenues of trees riddled with hearts, sleeved in pollen, tunnels where cars zip and vanish, bridges like decoy horizons blocking the horizon, industrial alleys of chainlink fences that thrum and buckle inwards: and always Corpus, in every room, hunched over a keyboard or a screen, half-way up the stairs, scrunched in a closet, trembling in a narrow bed, trying to enter another body, or be entered. Tangled, like yarn the cat got into. Where does it stop? The suburbs bake slowly in the fumes of August.

Even in the mind, there is a little humunculus, with huge teeth and fingers.

At night, there is the body again, setting itself on fire, naming itself Rigel or Polaris, instead of Otto or Prudence, exploding, becoming ash and water, then a single cell, safe in an oleaginous barely-permeable membrane, empowered to divide.

1
In the next apartment the immortals–
Ruth and Eugene – make love
with a soft mechanical whine
and sometimes the sputter
of a fuse shorting.

If we meet them in the elevator,
they look down with huge lustrous eyes.

We catch them patting their pockets
mechanically, and we offer a pen
or a lighter, but they just murmur.

They know the time it takes for us to answer,
however short, however long,
is ridding them of us.

2
In the movies that they love
there’s blood, spies interrogate terrorists,
the spectacle excites them, they nuzzle each other,
perhaps it reminds them what they are missing,
they slip their antennae under each other’s shirts.

We worry about them driving too fast
on the twisting half-lit highways,
vulnerable as they are to accidents.
Shattered they will endure
forever without love or speech.

Immortality is in the code, not the function.

At night they pray, for what and to whom
we do not know, all we hear
is a soft metallic voice
thick with bearing oil, stammering uncontrollably,
so that we long to teach them
our father who art in heaven,
but they have no death, no father.

3
It’s been raining, first a few minutes before dawn,
just spitting, the air like a cat’s breath,
then hard and solemn, little white domes
wobbling on asphalt, templates of sheer force.
The paper ripples with headlines: pictures of rain,
the Speaker crying, the lowlands under a blank sheen.

We put cruets beneath our storm windows.
The liquid that fills them
is so clear it seems absent, searing cold.

Some nights the drumbeat relents
and we hear the pulse (was it always this loud?)
and the immortals arguing next door —
you started it, you finish it,
it was perfect but you ruined it.

4
The time of separation is coming
when each will return
to his most cherished grievance.

Each will count the grains of rice
and crumbs she was denied
to set up a store
against the gathering wind.

5
We huddle on the rooftop
and peek down at the rowboats
that clog Broadway and Fifth Avenue
while the immortals in their starship
return to the night sky.

6
Once or twice a month
the cloud barrier opens
to reveal galaxies receding;

Polaris is missing. The constellations we recognize,
Andromeda and Cephus, have been swapped.

Only Venus still burns dimly, with a gray glint,
remote and exhausted as a lover’s face.

D. Nurkse‘s eleventh poetry collection Love in the Last Days was published by Knopf in fall, 2017. He’s the recipient of a Literature Award from the American Academy of Arts and Letters and was shortlisted for the 2011 U.K. Forward Prize.  He has taught poetry in MFA programs and the prison system, and was elected for a term on the board of Amnesty International-USA. He lives in Brooklyn with his wife Beth Bosworth and the wild puppy Zephyr.