In this, our final weekly post before we launch the spring issue of The High Window, we are featuring the work of Norton Hodges whose first UK full collection, Bare Bones, will be made available with it. 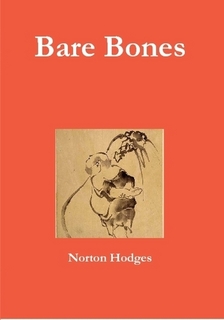 ‘Norton Hodges’s phrase ‘the integrity of life’ underpins this knowing, poignant and entertaining collection.  He writes authentic poems about memories, relationships and other life events with the kind of simple accuracy that belies the industry and skill in their making.’  Robert Etty 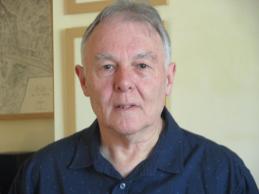 I want to be the white space
around the mountain.
It seems the tiny figures
in the village below
misunderstood their importance
in the greater scheme of things,
assuming their night torments
were as momentous as this forest,
this mountain, the heavens above.
But no, the scale is correct,
their troubles were minimal
and even though
they are part of this landscape,
they’re dwarfed
by what is larger,
inhuman, impersonal.
Like them, what I need
is to get beyond the way station
of self-important dreams
and stand on the raw edge
with a mind that is clear, white,
in love with nothingness.

JOURNEYS OF THE OLD

There was the path down to the shops
which became too much,
there was the minibus to the concert
that only needs a few steps.

There was the road outside the window
where you could make out a police car or an ambulance
through a gap in the fence
or guess at passers-by.

There was the road you remember
outside your first house
when you were in the midst
of the peopled world.

There was the quieter house
on the quieter street
where you went for trees
and a bit of peace.

There were the country roads
of Sunday drives
with the radio on
and a boiled sweet.

There were the long roads of holidays
when money was tight
so you slept on the Hog’s Back
half way there.

There were the roads
you couldn’t face,
the coach trips he planned,
the dangers of abroad.

There was the road
into the cul-de-sac
where the top-hatted mourner
announced the cortege you dreaded.

There must have been other
roads, paths, tracks
in your childhood,
but were they too straight?

And there was the last road
with the sea just out of reach
where no one was en route
and visibility down to zero.

Why was it the boy read last thing at night
balancing the book so that after long practice
he could hold it under the eiderdown?

It wasn’t for certificates, glittering prizes,
or shaking down the competition.

It was to make the circle of lamplight bigger
so that, in the unknown world outside,
he could see how far it would go.

How easily the old life’s shed:

you give the furniture
to an ex-con,
the books to Oxfam,

Norton Hodges was born in Gravesend, Kent, in 1948.  He studied French and German at the University College of Swansea and taught Modern Languages for 22 years. Distinguished by their clarity and wry wisdom, the poems of Bare Bones explore the aspirations of the men who returned from the Second World War and their determination to build a brighter future for their children. In poems that are accessible, eloquent and unfailingly authentic, Hodges evokes the consequences for his generation of better education and wider opportunities, aware that losing sight of one’s roots can become self-destructive and that, in the end,  what will help to pick up the pieces are love, dancing, silence, simplicity, the small contentments in accepting ‘the way the river writes’.