Last October it was very gratifying to see such an enthusiastic response to our feature on the work of the late George MacBeth, a poet who, although he had a considerable reputation in the 70s and 80s and was included in A. Alvarez’s groundbreaking anthology The New Poetry, is now not  widely read. John Cassidy, whom we are featuring today,  is another fine poet who first made his name in the 70s. Like MacBeth his presence on the internet is virtually non-existent and his books are now, sadly,  out of print.

Fortunately for us, however, John is very much a live and The High Window will be featuring four new poems by him in our spring issue. John’s work first attracted attention when he was included in Faber’s Poetry Introduction #3 in 1975, a collection in which his poems appeared alongside those of  Gillian Clarke, Valerie Gillies, Paul Groves, Ian McDonald, Andrew Motion, Tom Paulin, Jeffrey Wainwright and Kit Wright.

In 1978, he published his  collection, An Attitude of Mind, with Hutchinson. An outstanding debut, it was followed by two impressive collections with Bloodaxe: Night Cries (1982) and Walking on Frogs (1990).  Today we are featuring four poems from An Attitude of Mind and, in due course, will post selections from his Bloodaxe books.

John Cassidy: Four Poems from An Attitude of Mind 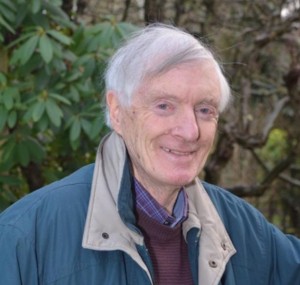 The spread stone town lies quiet as the light.
From some points you can look right down on it,
The valley sides being steep; an almost
Aerial view at the cost of pulled thighs.

Rooftops mark the lines of streets like the splayed
Spine of a fish. Early separate smokes
Finger the air over the houses, still
Wavering and uncertain in the bright

Morning, before their solidarity
Weaves a sunproof jacket for today’s use.
To move out of that valley is to glide
Along the bottom where the railway ran

And over no-man’s land to the next one
Just like it. Unless you clamber instead
Sideways, driving your legs beyond the streets
To stumble up among the tussocks here,

Where now in a chilling sweat you can sit
And spit on those rooftops if you want to,
Or lie and listen to the moorbirds when
They shout their mating noises in the wind.

No roads come up this way against the lie
Of the land. You have to come cross-country.
And there on the opposite hill a wall
Arches itself like a startled eyebrow.

The sheep cries were echoless,
unclear. That was the first thing.
Peaks stark a minute before
were gone now, and the colour
in the grass had been switched off,
half-noticed; but the sudden
dead sound of the bleating spelt
open threat. The rest followed.

Hardly had I resented
the clasp of cold on my neck
than the mist stood solidly
everywhere, almost nudging
my shoulder to stagger me
into peat pools, feet baffled,
unsure of anything, the
very ground untrustworthy.

Getting down out of it was
not the easiest of skills.
There was a full beck running
loud enough to be found if
I wanted to try. Never
follow a river, follow
a wall. Rivers can become
cataracts and rope down cliffs.

You see them streaking the sides
of hills, often the only
glitter in a grey day, loud,
silver and suicidal.
They have a logic that I
hesitate at, a straight-down
get-there determination.
It is the way of water.

But men build walls; they lumber
boulders in incredibly
precarious places, they
manage a balance you can
only gasp at, but where men
have lodged and perched stones there is
a sureness, a sense of place,
and other men find foothold.

Dare as they did and you can
trust them, moving with caution,
palms running over rough grain,
lichen, tufts of wool where sheep
have jumped, reassuring loaf-
shapes settled with so precise
an art, such knowledgeable
hands, that they live as comrades.

Grope for a wall then, wander
stride after slow stride towards
a loom of stone, past sheep skeined
in condensed mist, still, stopping
their chewing to watch you pass.
They turn their horned, alien
heads and stare. This is their world.
Bracken tangles your ankles.

It was as it always is.
The wall was there, in the end,
pushing itself in my path.
I caught hold of it, followed
its side as it led downward,
and came to the valley like
an awakening. Bright fields
were thick with hay being worked.

In the warm smells I walked through
there was friendliness; farmers
asked how it had been on top.
Damp, I said, looking back up
where the slope edged into cloud
and the walls vanished. It was
a word for the difference,
a word. I shook myself dry.

Not far away the rattle
of water flourished again
the river’s dash from the crag
and its jovial bounce through
the valley’s acres. That free
drop sparkled and surged in my
head all day. The wall’s art, too,
was something I was glad of.

It was the night of the mess dance. Ballooons on the bamboo walls,
The twirl of top brass, bags of off-duty bonhomie,
A spin of gin-bright wives whilst the scratched records hissed.
Outside was cooler. I found a night thick with crickets,
And a moon tangled in the thorn scrub.
There were fires glimmering on a far ridge,
And, distantly, the drums of another dance.
By the thin track in front of me frogs
Grated the darkness. Everything pulsed.

A dog came out of the grass, head low and loping.
xxxxxxxxThen
He stopped, one big foot
Lifted. Heavier than any
Dog. Tail flicking. I stood. Slowly
The head swung at me, and I saw eyes like lamps.
Behind me the music whined and the floor
Jogged. We watched each other, yards apart, waiting.
Then the eyes went out and he wasn’t there.
The grass shivered after him.

Inside again, the lights, the noise, the walls,
The ordinariness held off the night’s inhabitants,
Reducing again to rumour things
That prowled around out there.
Next morning, though, the pug marks
Scarred the smooth damp ground.

The mad whinnying of a starter-motor
Shook the morning awake, and it must have been
A bad morning for engines, from the sound of it.
It looked no better. Light was just touching
A few twigs, furred with rime. Mist hung about.

The night could be remembered.
An owl on a lamp-post swivelled
Its big disc face, one way and then the other,
Querying the grass. A bus rumbled
And hissed under its perch, but ruffled no feather.

The passengers’ glazed faces moved
In another life. If there came in that lamplight
A colourless, noiseless pounce, no one knew.
There would be no more than a squeak as a life went out.
The morning had no tell-tale blood on view.

The engine struggled, coughed a couple of times,
And sidled growling from the kerb,
Slithering over ice-patches and swinging
Away to town. Nothing now to disturb
The mist. No sound but the heart beating.

Rhythms resettled themselves.
The car would be throbbing at the pulse of beacons
Somewhere approaching town. Clocks irritatingly clicked
Or pompously, publicly boomed out another summons.
The day was moving; its metres meshed and locked.

The sky became visible and was much like
Yesterday’s. The usual things were again to be seen around.
That owl was a still to file away and store.
The lights on the road went out at the time arranged.
Newspapers pushed the date through every door.

John Cassidy was born in Lancashire and studied English at Manchester University for five years after post-war army service with an East African regiment. He has served as a literature adviser for North West Arts and has conducted readings and seminars at venues from prisons to universities. He was a tutor in Creative Writing at Bolton University, who awarded him an Honorary Doctorate. He has published collections with Hutchinson and Bloodaxe, and his poems have appeared in several periodicals and many anthologies. They have also featured on BBC TV and radio programmes.

4 thoughts on “John Cassidy: An Attitude of Mind”