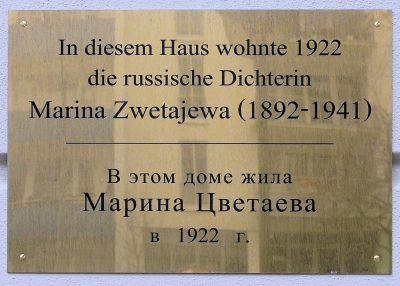 Recently we featured the work of Tom Phillips and the Bulgarian Poetry supplement that he has put together for our Winter Issue. Today we are continuing the Slavonic theme with some poems by Marina Tsvetaeva. Given that this year it’s the centenary of the October Revolution, it seems particularly appropriate to publish work by  one of the great poets of that era. Behind the scenes at The High Window Press we are also commissioning a new volume of  Tsvetaeva‘s poetry in  versions by Belinda  Cooke.

You can now read two poems from After Russia by Marina Tsvetaeva followed by an excerpt from Belinda’s forthcoming selection, the date of which is yet to be announced. 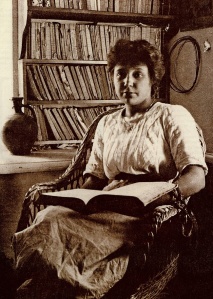 IN PRAISE OF THE RICH

Let me first make clear (having thought long
and hard) that between you and me there are miles.
I am one of the dispossessed
and my place in the world is honourable.

Under the wheels everything is surplus
the department of freaks cripples and hunchbacks…
From this time on, along with the church bells,
I proclaim ‘I love the rich!’

For their fractured, decaying roots,
nurtured early in the cradle,
for their confused habits
always dipping into their pockets.

For their secrets – always express delivery,
for their passions – always sent by messenger,
for those endless carousing nights,
(where you have to kiss and drink a lot!)

Because in the reckoning, in the boredom
the gilt, the yawning, the cotton wool,
they can’t buy me (and don’t buy my books!) ,
I stress, I love the rich.

And yet in spite of their smooth-skinned
Indulgence — their eating and drinking ,
suddenly you catch that unexpected
questioning look or dog-like glance —

Is this a pivot to nothing …
are the weights playing tricks?
And because between all outcasts
there is no greater orphanhood in the world.

As if they were broke: ‘I would have loved to help… but.…
For the quiet word from their parched lips:
‘Yes I counted out the gold coins…was a brother to him’ —
I solemnly swear — ‘I love the rich!’

I can’t be your friend, or belong to you,
with your houses, your money,
your ladies, ideas and cigars.

I’m like Schumann soaring in Spring —
upwards and out of sight,
a nightingale ringing in the air,
the chosen one!

Totally petrified, I am tied to the rack,
while they lick my feet.
I’m lost between a rock
and the explosion — I’m God in a brothel!

I am surplus to requirements, above it but outside,
not able to change — I don’t accept the scaffold.
The currency I pay is rags,
but I come from the constellation Vega.

Marina Tsvetaeva’s After Russia: Forms of Flight in her Poetry of Exile –
Berlin – Prague – Paris.

The title of Marina Tsvetaeva’s first book in exile from Russia seems innocent, almost bland at first sight, but it captures what individualises her as a writer in exile – a subject which might risk cliché: the whistful, naïve, nostalgic retrospective on the idyll of one’s homeland, a subject Tsvetaeava herself drew on occasionally albeit it with characteristic driving energy and powerful irony:

But what she achieves that is so much more powerful is the originality of her work, her ability to release herself from the forced drudgery of her daily life of, in essence, single motherhood to create an original series of motives driven out of that experience of flight.

Her daughter in her memoirs speaks of Tsvetaeva’s ability to literally clear the living room table and sit down to write anywhere. Her  self belief is well captured in her essay ‘The Poet and the Critic’ which provides wonderful advice to would-be poets today of how in the writing everything is subordinate to the poem; it is only after completion that one thinks of the market. She could endure the neglect that her fellow Soviet poets were saved from at the expense of the loss of personal freedom – the likes of Pasternak, Akhmatova and Mayakovsky – due to a certainty in her poetic muse, as she tells us in her poem  ‘Poets’:

for the path of comets

is the path of poets: burning without warming,
he reaps before he sows, explosion and forced entry—
your pathway is long maned and crooked,
not predicted by the calendar.

This is a belief that does not, however, free her from the daily isolation and bleakness –

What shall I do, singer and first born
in a world where the most black is grey,
where inspiration is kept as in a thermos
with this measurelessness
in a world of measures?

A familiarity with Tsvetaeva’s life and work confronts one repeatedly with this juxtaposition – wonder at her achievement in a life that can evoke only pity in its daily horrors.

Belinda Cooke completed her PhD on Robert Lowell’s interest in Osip Mandelstam in 1993. Her poetry, translation and reviews have been published widely. She has four books to date: Resting Place (Flarestack Publishing, 2008); Paths of the Beggarwoman: the Selected Poems of Marina Tsvetaeva (Worple Press, 2008) and (in collaboration with Richard McKane) Flags by Boris Poplavsky, (Shearsman Press, 2009). Her translation of the Kazakh epic Kulager by Ilias Zhansugurov is forthcoming (Kazakh National Translation Agency (December 2017). She currently lives and teaches in Scotland on the west coast.