Eighty poets on the pandemic.

Thousands upon thousands of poems were written in the unforgettable year 2020, when corona virus changed the world. Eighty of the best have been carefully selected for Shoestring’s new anthology. They come from all five continents and all corners of Britain, and look from several different angles at the crisis. They are not all about doom and gloom. Sickness, bereavement and isolation are all here, along with empty cities and animals roving the streets, but there are also some very funny and life-enhancing poems about how people are coping in extraordinary times, and intend to come through. 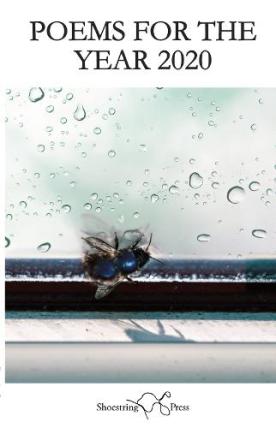 She died there in hospital
no husband, Sissy, daughter Ingrid
no church kin around her
and at her funeral of regulation 10
her own Lusamba saw the coffin
and could not imagine her within.

She was a mother to everyone
who was blown into Victoria station
lost for food or direction,
took them home like injured creatures
fed them till they were strong
watched them fly, never to return.

The concourse deserted like Christmas Eve
only without the straggling drunkards
or last-minuters wandering homewards,
when a man cursed and spat hatred
announcing that he had Covid
(though he later tested negative).

She’d worked all hours overtime
to send money home to her mother;
they made her work without PPE
sickness made her vulnerable to disease.
She died alone, the banners remember
outside her station chants of – ‘Justice for Belly Mujinga!’

3am – no cars, no moon, no stars, no cat yowls,
no dog howls, only this clear voice which asks
‘On whose walls will these pictures hang,
where will four thousand books find home, who
will dust my mother’s Staffordshire, her Spode,
Crown Derby, Famille Rose, Meissen figurines?’

Lying here, only one thing’s sure – when I go,
which may be soon, I’ll no longer know nor care.

THIS IS JUST TO SAY (LOCKDOWN)
after William Carlos Williams

THREADS
for my son, Silas, NHS anaesthetist and rock-climber

Dangling on a rope
hung from a cliff-top
you look like a tiny spider
spinning a thread
the slightest gust
could snap.
Now your patients
are hanging on threads.
And all of you
working on wards
where a terrible
scissor-wielding hag
decides who to spare,
which thread
next to cut.

Note: the ‘terrible scissor-wielding hag’ is Atropos, eldest of the three Fates.

Clearly, the poems in this anthology have all been written and chosen within a very particular context, and I am reviewing it (May 21) within another phase of that context – the pandemic currently seems to be in retreat within Britain, but rages fiercely elsewhere in the world, and it seems that a return to any sort of global ‘normality’ is still a very long way off. The editor, Merryn Williams, explains the compiling of the book in the introduction, saying that she ‘raided’ both the Manchester Metropolitan University online anthology ‘Write where we are now’, and Janine Booth’s ‘CoronaVerses: Poems from the Pandemic’, and that she also sent out a general appeal for other potential contributions.

Her aim was ‘to cover all possible angles of the Situation (sic)’, and while this may not quite have been achieved (realistically, how could it be?), there is an admirable range of style, tone, response and individual subject matter/approach throughout the book, and I did find it a good read, and I enjoyed (yes, actually enjoyed, despite the subject matter) many of the poems. I recognised some of the contributors’ names, so I know that many of them are poets who  ‘write regularly’ , but others were new to me, which – of course – does not mean that they are therefore new to writing; the overall tone is that of accomplished poesy, rather than that of writing from supported amateur community groups. Having said which, the book’s claim that it features poems from ‘all five continents’ may be factually accurate, but the very great majority of poems have been written in England (writers’ locations are given).

The book opens with an arresting image:

The security guard puts the gun to my head
then clicks. He turns it to show me: 36 degrees

and waves me in, his expression hidden
behind his mask, his eyes vacant.

which immediately introduces us to tropes which were then new to most of us, but which were soon to become horribly familiar. This first poem is from China and the second is from South Africa:

Sure as babies,
nine months down the line
there’ll be a boom
of virus poems.

These two poems make a great start to the anthology. As would be expected, there is a general sense of anxiety and vulnerability underlying many of the poems. Mona Arshi (Ealing, UK) references other plagues, affecting other targets – in ‘Driving’ she writes about (by implication) Dutch Elm Disease:

How carefully I drive now,
so like my father, yet shame when it returns

is powder-light, yet heavy as logs, where there’s
a sharp smell of foxes and a beetle is busy
in the twig-crotch scratching out its wretched sound.

Not all of us will make it. Sun lured
my magnolias into blossom, a wild cream magnificence of Spring.
The night frost burnt them. Now trees of brittle toffee warn,
too much too soon. My hands are split, cracked and stained
with turmeric. Tonight, I plan nettle soup, picked with gloves on
and boiled for twenty seconds to kill the sting.

The issue of distance and enforced separation from those we love is explored:

and I carry these images
in my heart.

But I can still feel your breath
on the nape of my neck, your hand
warm on my hip, your absence
my shield.

There are several references to infamous events/news items – testing your eyesight, trips to Barnard Castle etc – and also to more positive actions, such as the clapping for the NHS, the Repair Shop on BBC TV, and the Italians singing opera from their balconies when Venice was in lockdown. There are poems hymning the everyday courage of health workers and others who kept the country running and the shelves stocked. In ‘Out Walking’ John Mole (St Albans, UK) reflects on his/our new social skills:

See me perfect my neighbourly

swerve and dip
away from the pavement

or my deft parabola
when exercising in the park,

part virtue, part apology,
and always with a smile.

The anthology editor includes her own poem ‘celebrating’ 2019, which foregrounds the way in which all our own, personal life issues have been bulldozed, and/or obliterated, and/or amplified by the pandemic:

2019 was the year when my daughter’s marriage
seemed solid, the year I implicitly believed
in red roses on Valentine’s Day, and smiling children:
more fool I. And now it’s the plague year, 2020.

This is an anthology, so, inevitably, there are some poems I liked more than others, some I thought were weightier or more compelling or more original than others, and some that leapt out at me, for quality or wit or for catalytic reference. Does it address ‘every possible angle of the Situation’ – of course not, and I will say that, while it may include contributors from all five continents, I didn’t get a sense of very much cultural diversity in the contributors – but – I do think there is quality and variety in the writing, and I congratulate Merryn Williams on having chosen well. Here, indeed, are poems for 2020, a peculiar year, full of unexpected tragedy and unexpected hope, and those two forces are very well represented in this collection.

Note: This anthology will also be reviewed by Kathleen McPhilemy in the autumn issue of The High Window.