The High Window‘s autumn translation supplement will be the result of a collaboration between Cambridge University Press and Kazakhstan’s National Bureu of Translations, to whom I would like to express my thanks for permission to publish poems from their forthcoming anthology: Contemporary Kazakh Literature: Poetry (Cambridge University Press. 25th September, 2019).
xxxx
With a week to go before the publication of the autumn issue there is still time to preview some of the poems included in this anthology.  Previously we published some poems by Olzhas Suleimenov, the grand old man of Kazakh poetry.  In this final post before the autumn issue we are featuring the poetry of Nazira Berdaly, one of the younger voices in contemporary Kazakh poetry.

*****
XXXXX
Nazira Berdaly (b. 1980) is a poet and journalist. She has worked as an editor in radio and television and has gained popularity among her audiences as a presenter on national television. She is currently head of the TansholpanArts Association at the TV and Radio Corporation Qazaqstan. Her debut poems were published in the Jambyl regional newspaper Aq Jol and were later included in a collection of works by young writers of the region. She has since published three poetry collections. Berdaly is the author of the lyrics for a number of popular songs.
xxxx
*****
XXXX
Nazira Berdaly: Three Poems 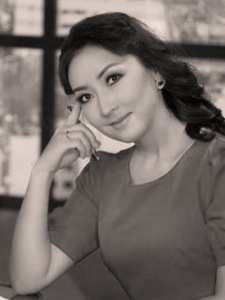 ‘SPRING CAN REALLY HANG YOU UP THE MOST’

When it came this year, spring did nothing for me.
I had no time for songsters chirping.
My frozen heart languished.
Buried like bulbs, my feelings groaned
beneath the weight of snow.
Who cares for seasonal birds
and springtime on the shore?
So what if I haven’t spotted a gull?
It’s spring in the city. Big deal!
It bucks you up or it doesn’t.
City. Spring. Night.
Its stars are familiar and fake.
Its cacophonous songs go on and on.
When I stepped out on the balcony
I said to myself: It’s spring
then tore up the tulip I’d planted …
And when night falls it’s just as bad.
I’m ill at ease. The sky is cold.
I try to play the recorder
and improvise a ‘Song of Birds’.
It leaves me cold, joyless.
My verses, too, are lifeless,
the images vague as shadows
glimpsed on distant slopes.
Could any spring on earth
be so devoid of grace?
Let me waken up again.
For so long I yearned for spring,
but not, alas, this one.

Note: The title of the English version of Nazira Berdaly’s poem has been borrowed from a song by Fran Lansman

WHEN YOU ASK ME WHERE I AM

When you ask me where I am
I could ask myself the same
as I think about life and verses.
Laughing and making the most of my days,
I’ve not been away at all
or not in the way that you imagine,
determined not to lose sight of myself.
For who’s impressed by histrionics
or even cares if I succeed?
If I keep my failures under wraps,
the hidden powers ground me
or else I’ll borrow wings
to fly away somehow.
Don’t let on you’re disappointed
or tell the world how tough it’s been.
Rinse off the dust you’ve accumulated
and don’t forsake your dreams.
Don’t bore those nearest to you
with the torments of your soul.
When you accept what lies before you,
it doesn’t mean you’ll be alone.
So let detractors mock me
my secret muse will be my strength.
I wasn’t away as you had feared –
alive perhaps
only in my private sphere.

It’s autumn again and the trees are golden.
A new term has started. TheTV schedules change.
Though all the sound bites say the same,
I hope for better things.
Smiling, I ask for news about you
as soon as day dawns.
Like an autumn leaf, my soul is trampled.
Even you were trampling it,
when you wished me well.
Still young and writing poems,
I don’t know what the future holds.
Is autumn leading me on again
towards its spurious spires?
One strike of the match and I’ll explode
as day after day I dither
at every fork in the road.
Just passing through,
like a seasonal guest, I crave
no more than a friendly welcome.

1 thought on “Nazira Berdaly: ‘Spring Can Really Hang You Up The Most’”