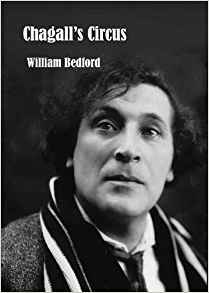 Throughout his life Chagall drew inspiration from the theme of the circus. He was dazzled by it, and now, 34 years after his death, William Bedford dazzles us by documenting Chagall’s life and work in a series of 28 poems entitled, Chagall’s Circus.

Bedford divides the poems into five sections charting Chagall’s life from his birth in Russia in 1887 until his late work in the 1980s. Chagall died in France in 1985. Bedford contextualises this collection in terms of the political, geographical and social aspects of the time, as well as giving us an insight into the emotional and professional life of this painter and the artistic landscape he inhabited. His opening poem Self-Portrait with Brushes (1909), has as its epigraph the following quote by Chagall:

“My name is Chagall, my emotional life is sensitive, and my purse is empty, but they say I have talent.”

And so begins this intimate portrait in Chagall’s voice. In Grandfather’s House (1923) he speaks of his youth:

I spent my childhood devouring horizons,
seeing angels in the pattern of a carpet,
spring rain waltzing the hessian curtains.

He speaks of “the hunger hiding in colours,/ the graveyards at the end of rainbows”, how his “father burned down like a used candle”. His family is his palette and the poet paints every bone of their bodies.

This writing is visceral and evocative; Bedford delves into Chagall’s life and gently mines his inner thoughts. In Red Nude Sitting Up (1908) he speaks of his father again, “I had a handful of roubles in my coat pockets,/ the only money my father ever gave me”. Chagall has set out into the artists’ world, penniless; he dreams of art, how “Matisse smiles in my red nude sitting”, how he forgets the model’s name but remembers “but the apples/ and the fire burn in my memory/ as the red and green of my canvas burns/ my first encounter with my own rapture”.  Later in the poem he states, “I painted my red nude sitting in Vitebsk” (Chagall’s childhood home) and reference is made to it and to cheder, shtetl, and his Jewish upbringing. His faith is referenced throughout the collection.

Bedford has a keen eye for place and fills his poems with the language of the country he inhabits and early on he tells us “I spoke Russian before I spoke Yiddish” (Russian Wedding (1909)). Through his research he moves the reader with ease from Russia to America and France, from his tight-knit family who “preferred photographs” (Red Nude Sitting Up (1908)), to war and revolution in Russia. In all the turmoil he says, “… the artist can only stand at his easel./ The artist can only be concerned with blue” (Onward! (1917)). At this easel Chagall painted Bella with White Collar (1917) (Bella Rosenfeld, Chagall’s first wife) and here the voice begins with tenderness:

All I had to do was open my window
and in streamed the blueness of sky,
love and flowers for my beloved Bella.

As the subject changes from the personal to the political, so too does the tone, and
Bedford highlights the melancholy, the struggle, the suffering as time passes. When Chagall leaves Moscow his early works are lost.

’What has it got to do with Marx and Lenin?’
this painter and his girl in their seventh heaven.

The external world is all-consuming. Bedford crams his section War and Revolution in Russia: 1914-1923 with brutal images, Chagall speaks of the

Ten days that shook the world shook me,
and Russia thick with ice turned upside down,
Lenin’s Dervish dance of words a rhetoric
of Red! and Red! … blood’s whine.

Chagall takes his place at the easel once more:

Be careful what you say, or say nothing.
But I never learnt to be careful.
I am Chagall in Russian or in paint,
airborne across a sky of deepest blue,
October’s blue the blue of Russia’s soul.

In a later section of the collection Chagall arrives in America and learns of the concentration camps:

New York! New York! O my America!
my new-found land of skyscrapers and hope
as the millions walk their walk to death.

Here and in France, from WWII and beyond, in the midst of fear and unrest, he concentrates on his paintings, which include The Large Circus, The Grand Parade, Madonna With the Sleigh and Bridges Over the Seine. This collection made me want to revisit Chagall’s work, and having read it I am sure I will see it in a different light.

Bedford has perfectly captured Chagall’s life in this ekphrastic collection. He tugs on the painter’s sleeve for attention and documents what he hears, giving a detailed account of his heritage and artwork, and an intimate insight into his passions and struggles. Chagall’s Circus is not just an ekphrastic collection. Yes, we come face-to-face with the Cubists, with Picasso, Matisse and a host of Chagall’s paintings, but we are also engulfed by a Fascist landscape, invited into a love story and taken on an amazing journey.

“In our life there is a single color, as on an artist’s palette which provides the meaning of life and art. It is the color of love” Chagall.

Abegail Morley’s debut collection, How to Pour Madness into a Teacup, was shortlisted for the Forward Prize Best First Collection. Her most recent collection is The Skin Diary (Nine Arches Press) and Cutting the Cord is forthcoming from Nine Arches Press. She is one of the co-editors of Against the Grain Press, an innovative small independent poetry publisher, and editor of The Poetry Shed.

The landscape format and glossy cover of ‘The Time Travellers’ Picnic’ immediately intrigue with a ‘not your normal poetry collection anti-matt A5 portrait approach’, with a striking image of Michelangelo’s ‘David’ sandwiched between the Eiffel Tower and a Salvador Dali time-bending clock in the cover’s wicker picnic basket. Simpson’s approach to language is just as eclectic – with her use of LOL, IRL–scattered text-speak and almost-product-placement liberal use of Ted Bakers, Chanels, Tescos and Matalans, juxtaposed with a more traditional poetic language, using both simile and metaphor to strong effect.  I am aware that one should never try to find the poet in the poem) and she does not flinch from difficult subject matter, such as an alcoholic mother, the early death of her father and their moral failings, both as humans and as parents (although at no point does the poetry feel finger-pointily ‘They f**k you up, your mum and dad’). Indeed, the poems often feel coolly detached, resembling reportage on the life the poet has lived, without any undue judgment of those involved in her life. However, this is a self-aware collection; the death of the poet’s mother appears to release her to a new life of education, teaching and later marriage which carries with it a joyous feeling of redemption (although marred by illness), of succeeding against the odds of the early backdrop of difficulties she has faced. The reader recognizes immediately a very distinctive and entertaining voice and, as more and more poems are encountered, begins to feel an intimate bond with their writer – a very much ‘getting to know her’ experience, as though listening to a close friend speaking.

The language employed by Sinclair is very condensed – obviously not generally a bad thing in poetry but sometimes I was left longing for the use of an indefinite or definite article when these had been omitted. This particular quirk did begin to grate after a while, and I was left recalling a critique of one of my own poems by poet and tutor Neil Rollinson – ‘It is not cool to leave out articles!’ – and wishing Fiona Sinclair would use regular syntax to create a more lyrical and rounded read. There is a breathless and natural-speech feel to this poetry which is fast-paced and accessible, but an occasional respite from over-compression would have been welcomed. For example, in ‘Free Wheeling’, a small, cycling child encountered whilst out shopping evokes – ‘Envy’s scratch, as I am damned to haul myself up/never ending ladder of wants whilst he passes’ which would lose nothing, as far as I’m concerned, with an ‘a’ insert before ‘never ending’. In fact, such omissions do occasionally necessitate double-reading to ensure the correct meaning is extracted but this is probably my failing rather that the poet’s and is obviously a subjective response – another reviewer may love this reduction of language, a boiling down of words to the absolute minimum.

Having said this, there are some spectacularly good turns of phrase and inventive approaches to language which shake the reader from complacency and are to be applauded, as in ‘Words’:

Never took your name since after several predecessors
felt I was taking on a cliché.
Found too lifetime chopping off horror’s many hydra heads
its good fortune gives me PTS.

Although I admire Dempsey & Windle’s cover production and formatting (which enables the poet’s often long and interesting line-lengths to sit comfortably unsquashed or unaltered on the wide pages; normally a publishers’ nightmare when trying to fit onto a narrower page size), if I were Fiona Sinclair, I would be a little disappointed with the editing and proof-reading of the collection. There appears to be quite a large number of obvious errors such as ill-placed capitalization and punctuation, separation into two of words such as ‘in doors’ which should be one.  Maybe these aren’t errors and are intended to shake things up, but they did snag, such as in ‘An Old-Fashioned Stunner’ when:

Your words graze; no prospect in middle aged
of an ugly duckling transformation,
only the last resort of surgeon’s knife or aesthetician’s needle.

This should surely read ‘in middle age’.  This is obviously not the fault of the poet, but a more careful eye would have helped, as these errors are distracting and disruptive (for a pedant, anyway).

These are interesting poems looking at life from the clear gaze of unusual angles; the re-fashioning via a new wardrobe of a boyfriend who has let himself go, a friend who has a penchant for shop-lifting and riffs on mental health, drug abuse, childlessness and the late-blossoming of an internet romance. This last subject is particularly sharply and acutely observed, as in ‘Chartwell’:

Six years ago, when you finally arrived like a parcel lost in the post,
I basked in friends’ your blooming testament to feeling loved,
Only after marriage, when best behaviours are relaxed,
did I realise that I had textbook married my father.

(again, an example of a proof-reader’s error where, for me, the comma after ‘loved’ should potentially have been a full stop based on the capitalization of ‘Only’).

This is a captivating and stimulating read (only diminished in a very minor way by the irritations outlined) which I thoroughly enjoyed and, in the process, felt I began to know Fiona, her life-story and her honest and open character.

Jill Munro  has been published in various magazines including Orbis, Prole, Ink Sweat and Tears, South Magazine, Poetry News, And Other Poems and The Frogmore Papers. She has been anthologised in The Chronicles of Eve, Paper Swans.Long-listed three times for the National Poetry Competition, Jill’s first collection Man from La Paz was published in 2015 by Green Bottle Press. She won the Fair Acre Press Pamphlet Competition 2015 with The Quilted Multiverse, published April 2016.