In today’s High Window preview we are continuing the archeological theme we explored in last week’s feature via the work of Wendy Pratt.  Tim Miller is an American  poet whose poems has previously appeared in the THW#4 in December 6, 2016 and, like Wendy he is fascinated by archeology. In fact, both poets have written poems about Star Carr.  We are pleased to announce also that The High Window will publishing Tim’s new collection, Bone Antler Stone in the course of 2018.

Bone Antler Stone covers nearly forty thousand years of European history, from the painted caves of Spain and France to Celtic and other contact with Rome and Greece. In between are poems on early ice age villages, funerary practices and burials, as well as on ritual and artistic life, poems on gods and goddesses and the elements, and on their axes, shields, figurines, calendar discs, and cauldrons. The last third of the book serves as a travelogue specifically of ancient Orkney; the four poems below are from that section. 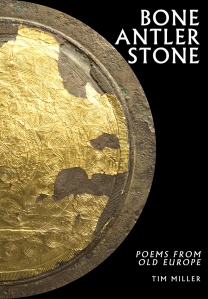 Finally, we take the opportunity to flag up Tim’s excellent poetry site Underfoot Poetry which is well worth viewing for its discerning mix of contemporary poets and their poetic forerunners’. 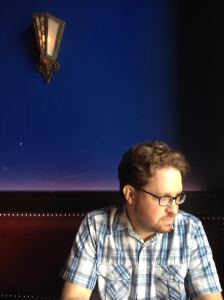 THE WANDERER (FLIGHT TO ORKNEY)

I met up with Pytheas there, on the plane,
the one heard from a hundred years after Herodotus
who turned Greek tradition into truth:
all the tentative talk of tin islands,

of mines and a mother source of amber –
Pytheas was the pilot who proved it,
from ancient France to the Faroes
through the threshold of the north to Thule,

and now next to me, so near
but still measuring and marking out the meaning
of the stars and the sea and the shafts deep
down through the dread earth delving for the veins,

his haggard head a mournful horde
of names and numbers and of navigation,
of what the world was and how it went,
those huge seasons spent hugging Albion’s shore.

And seeing my slim book about him
he smiled somehow to see his world reshaped,
but as we descended he dissolved and died away
into a ninth and another wave, in the North Sea.

I woke in Birsay and stumbled from the bus,
found a small shop with cereal and milk
and with these juggled between my arms and
with my laptop and some books on my back
I walked the three miles to Swannay along
the winding, windy road to our cottage.
While I’d already been up for a day
and only wanted to sleep for another
that flat curving road will never leave me,
two hours of long shadows and waning day
and clouds crawling as slow as me, always with
another stop and backward look at the
road receding, while the stubborn North Sea
seemed to stay where it was, always at hand,
the Brough of Birsay like a huge slim rock
skipped into the ocean centuries ago
by the flicked wrist of some bored god or giant:
and for those exhausted walking hours
that tidal island was my monument:
dipping away as the road rose, or how
it would slide to the left or right with the
curve of the blacktop and my controlling feet.
But mostly the fields were empty, mostly
those minutes were my own, the farmhouses
or cottages or homes of crumbled stone,
abandoned and jagged and roofless and
taken back by the yellow-green land –
mostly this was all, an all that was everything.
A few times I stepped into the high grass
to let the odd local drive by, and while
I had lost sight of the sea, near the end
the downward slopes of two hills met, and there
suddenly was a triangle of blue
and a northward glance that wouldn’t hit land
until the ice and snow of the Arctic,
further seas and other islands made for
someone else’s feet, if at all, since here
was the cottage I’d only seen photos of
back on another shore when this long walk
had only been a hint, only a desire,
and not the memory now I cannot shake.

THE BURN OF BOARDHOUSE AND THE BARONY MILL

The Burn of Boardhouse and the Barony Mill:
the words are beyond music and rhythm
or, they bring to them color and memory:
waves and waves of windy, sand-colored grain
bordered by grey barbed wire, high grass and
the bright shots of curled, uncoiling thistle.
And the rush of the burn to the sea, perpetual,
the haste and hum and somehow the languor
of water and its ways, past abandoned
outbuildings and the bustling mill, through fields
and beneath bridges and between backyards
to empty as ever into Birsay Bay.
There is no thrum like the running river,
the drawl and croon that still hasn’t settled,
from the first archaic ears to stop and smile
to the afternoon we caught up to it.

THE WANDERER II (FLIGHT FROM ORKNEY)

“That’s the problem with airplanes,” Pytheas said,
and he meant that there was no time to mourn:
we left the islands in literal flight,
and rather than the lingering, long look,
it was a daybreak dash, a quick death
from airport to plane to atmosphere.

By then our best words were garbled:
xxxxStone and sound and sea
xxxxGreen glass, green grass, great Magnus
xxxxHearth and heather and weathered rock
xxxxBurns and burials and Brough
xxxxHorizon blue atop deep blue, and all that is beneath
xxxxOld bones, old bodies, and all that is before
xxxxThe deep and the dark and the dead
xxxxThe shore and the shells and the shoulders of land
xxxxThe going to ground, the generations, and the gods
xxxxThe teeth of the tide and the teeth of deep time

The price to pay for a place like that,
the price to pay for poems like these
are such scattershot, scarified syllables
born from a belief of having belonged,
but forced back among those who belong
so normally and naturally to anything
that our intensity is terrifying or just tiring,
and so the dead and the damp doubleback
into just another of our silent, stone secrets.

So Pytheas proceeded in reply,
assuring me that for us, and for ours,
there was only the odd look, the old look, the awed look,
but rarely the real look of revelation,
or the consolation of having communicated.
And so the motive was to make meaning and memory
a kind of barrow burial in bloom
a garlanded grave underground
forged with turf and stone and fire and then forgotten,
until a propitious step or a sudden storm
blows open this book’s binding
and lays each line out in the light again,
shells of syllables dotting the sand.
To be summoned by someone is always a surprise, he said,
and someday I would feel a spade on my skull,
someday I would stand up and start singing,
but until then I should love the loneliness and its lessons,
and he bade me to build it well, to bury it well, and wait.

Tim Miller’s poetry has appeared widely in the US and UK. His previous books include Hymns and Lamentations (2009) and the long narrative poem, To the House of the Sun (2015), both from S4N Books. In June, Pelekinesis will release his first book of short stories, The Lonely Young & the Lonely Old. He also edits the poetry blog Underfoot Poetry (www.underfootpoetry.wordpress.com), and writes about poetry, history and mythology at wordandsilence.com.